Public Texts is a monthly series of conversations that brings authors to talk about their work, based on their latest book. The session is usually structured as an hour-long conversation between the author/s (and illustrators) and the moderator. After the session, the floor is open to audience for questions.

Our guests vary from authors of books on science, nature and culture to authors of fantasy fiction and children’s books. Some of our past speakers include Harsh Mander, AR. Venkatachalapathy, Kartik Shanker, Asha Nehemiah, Sukanya Venkatraghavan and Shreya Ila Anasuya.

All sessions have a popup bookstore where the audience can buy the book being discussed and other related titles. The IIHS Library also organises book exhibitions alongside showcasing our public reference library. All Public Texts sessions are free and open to the public. Children are welcome. For updates on upcoming Public Texts sessions, join our mailing list.

Public Texts with
Menaka Raman
20 April 2021
The April edition of Public Texts featured Menaka Raman in conversation with Swarna Rajagopalan about her novel, Loki Takes Guard. They spoke about breaking gender stereotypes in sports, the importance of following your passion and writing about characters that you don’t necessarily like but learn to love.

The December edition of Public Texts featured Paro Anand in conversation with Paromita Chakrabarti about her novel, Nomad’s Land. They spoke about displacement and violence in literary narratives, how stories shape children and more.

The November edition of Public Texts featured Taran N. Khan in conversation with Somak Ghoshal about her debut work, Shadow City: A Woman Walks Kabul. Taran talked about her travels to Kabul, exploring the city streets on foot, its forgotten history and more.

On October 6, 2020, Public Texts featured young adult author Revathi Suresh in conversation with fellow writer Shalini Srinivasan about her latest novel, ‘In Now & Then’ (1inchmargin, 2020). The author spoke about teenage friendships, love, identity, and their aspirations.

Tuesday, 8 September 2020 | 6 pm
On September 8, 2020, Public Texts hosted authors Nisha Susan and Krupa Ge about Nisha’s debut short story collection, ‘The Women Who Forgot to Invent Facebook and Other Stories, (Context, 2020). The author spoke about her characters, their lives imagined now, and how the Internet has reshaped the way we live and experience our cities.

Writing about science for children

At the next Public Texts session titled ‘Sci-Fun: Writing about science for children’, Nandita Jayaraj and Roopa Pai will be in conversation with Aparna Kapur about their books, 31 Fantastic Adventures in Science (Puffin, 2019) and From Leeches to Slug Glue (Puffin, 2019) respectively. Their conversation will revolve around the challenges of writing about science for children. This session will be on Thu, 21 Nov from 6:00 pm onwards at the IIHS Bengaluru City Campus, Sadashivanagar. The event is free and open to the public. Please RSVP here as seats are limited. If you are unable to attend the event, you can watch the livestream here.

The Seeker and the City

A life of ordinary pursuits

On 17 Oct 2019, author Roshan Ali was in conversation with Somak Ghoshal at the Public Texts session titled, ‘The Seeker and the City: A life of ordinary pursuits’. The session was based on Roshan Ali’s debut novel, Ib’s Endless Search for Satisfaction (Penguin, 2019), shortlisted for the 2019 JCB Prize for Literature. The novel is about living with a parent with mental illness and growing up in the city. The session was refreshingly honest and Roshan delved into his process of writing, his narrative style, getting shortlisted for prizes and coping with the city. If you missed it, watch it here.

On 26 September 2019, educators Kamala Mukunda and Arjun Jayadev spoke at the Public Texts session titled, ‘No Easy Answers: How children learn and grow’. The session was based on the book, What Did You Ask At School Today? Book 2 (HarperCollins India, 2019) by Kamala Mukunda. The gathering was warm, friendly and full of laughter! There were 100 members in the audience, relaxed enough to join the conversation with questions like, ‘as a teacher, what do I do when I mess up?’ ‘Admit it! There will be many of those’, Kamala replied. The conversation also discussed the myth of the left-brain and creativity, how to use technology in classrooms and the idea of ‘brilliance’ in a child. If you missed it, watch it here.

Putting our past in context

On Monday 19 August, IIHS hosted yet another full house at the Public Texts session with Manu S. Pillai and Prem Panicker. History buffs were all ears for the session titled, India’s Yesterdays: Putting our past in context. Other than his new book The Courtesan, the Mahatma and the Italian Brahmin (Westland, 2019), the chat delved into childhood, identity, nationalism, caste and the importance of seeing these in context. If you missed it, here are some photographs from the session and watch the full video here.

We had Harini Nagendra, Seema Mundoli and Rohini Nilekani sit down to talk about trees as memory keepers of cities, based on the book, Cities and Canopies (Penguin, 2019). Rohini suggested a Bengaluru Forum for Urban Forestry, Seema held a pop quiz on seeds and Harini spoke about not cutting mother trees. Head over to the IIHS YouTube Channel to watch this session.

Public Texts session titled Casting a Spell: Voices in feminist fantasy fiction was held on Thursday, 20 June 2019 from 6:30 pm onwards at BCC. Click here for photographs from the session.

Shreya Ila Anasuya and Sukanya Venkatraghavan were in conversation with Shalini Srinivasan about their feminist fantasy collection, Magical Women (Hachette, 2019). They discussed the importance of feminist voices in fantasy fiction. The discussion included what feminism means to them and how fantasy lets them play God with their characters. Head over to the IIHS YouTube Channel to watch this session.

Where do Stories Come From? Writing for Children Through the Years

Public Texts session titled Where do Stories Come From? Writing for children through the years was held on Friday, 31 May 2019 from 6:30 pm onwards at BCC. Click here for photographs from the session.

Children’s books author Asha Nehemiah was in conversation with writer and editor Bijal Vachharajani. They discussed writing for children through the years with a focus on concepts, process and relevance. A variety of children’s books were available for purchase at the Lightroom bookstore pop-up shop at the event. Head over to the IIHS YouTube Channel to watch this session.

Slow and Steady: Talking about Sea Turtle Conservation in India

PublicTexts session titled Slow and Steady: Talking about sea turtle conservation in India was held on Thursday, 2 May 2019 from 6:30 pm onwards at BCC. Click here for photographs from the session.

Ecologist Kartik Shanker was in conversation with H S Sudhira, Director of Gubbi Labs about his book From Soup to Superstar: The Story of Sea Turtle Conservation along the Indian Coast (Harper Litmus, 2015). The session explored the slow and steady stride of sea turtles into India’s conservation story. Head over to the IIHS YouTube Channel to watch this session.

All Characters are Tamil: A Conversation about Tamil Culture, People and Politics

The March edition of Public Texts, All Characters are Tamil: A conversation about Tamil culture, people and politics, was held at BCC on Thursday, 21 March 2019 from 6:30 pm onwards.

A R Venkatachalapathy was in conversation with Ranjani Krishnakumar about his book Tamil Characters: Personalities, Politics, Culture (Pan Macmillan, 2018). The conversation  unpacked contemporary Tamil Nadu through politicians, current events and policies. Head over to the IIHS YouTube Channel to watch this session.

Close Encounters of Another Kind – Women and Development Economics

Book launch of ‘Close Encounters of Another Kind – Women and Development Economics’ by Dr. Devaki Jain was held on 10 September, 2018.

Aromar Revi, Founding Director of IIHS was in conversation with Padma Bhushan Dr. Devaki Jain, writer and feminist economist. Dr. Jain’s latest volume of essays brought together her various engagements with public policy, development economics and women. It examined the gender development mission that began in 1975 with the First World Conference of Women and went on to become the Women’s Decade, while simultaneously rooting itself in the reality of the Global South. In her newest work, Dr. Jain highlights the ways in which the design of public policy has ignored the lived experience offered in India as development.

Jai Sen, the editor of The Movements of Movements – What Makes Us Move? Vol. 1 was in conversation with IIHS faculty Solomon Benjamin and with Madhu Bhushan, independent activist-writer-(re)searcher. He spoke about situating movements and uprisings in internationalism from grassroots to a global level. This event was held on 18 April 2018.

Health Inequities in India: A Synthesis of Recent Evidence

This book brings together a vast expanse of research on health inequities in India, identifies research gaps, proposes areas for future research on the subject, and discusses all the major documented axes of marginalisation. This event was held on 23 February 2018. For more details, please visit: http://www.healthinequity.com.

The conversation was about creating awareness on waste management at a young age and how this book could act as a guide for everyone to understand, practice segregation, recycling and reusing of waste and to become responsible citizens of tomorrow. This event was held on 16 September 2016.

Ahmedabad: A City in the World

In this PublicTexts event, Jayaraj Sundaresan, Fellow, Bartlett Development Planning Unit, University College London was in conversation with Amrita Shah, Journalist, Writer and Visiting Faculty at the Centre for Contemporary Studies, IISc, on her recent book, Ahmedabad – A City in the World (Bloomsbury, 2015). This event was held on 4 February 2016.

Looking Away: Inequality, Prejudice and Indifference in New India

On 24 April 2015, author Harsh Mander was in conversation with Samar Halarnkar at the launch of his new book, Looking Away: Inequality, Prejudice and Indifference in New India analysed the many different fault lines which crisscross Indian society today.

In this PublicTexts event held on 11 March 2015, Dr. Vimala Rama Rao, was in conversation with author Shashi Deshpande, about her recent novel, Shadow Play (Aleph Book Company, 2013), a masterful meditation on kinship, marriage, ambition and the changing face of urban India.

Bengaluru: Roots and Beyond

In this PublicTexts event, Sathya Prakash Varanashi, architect and convener of the INTACH, was in conversation with Maya Jayapal, urban historian and author of her recently released book Bengaluru: Roots and Beyond (Niyogi Books, 2014) on 24 April 2014. Maya Jayapal’s other publications include Old Singapore (Oxford University Press, 1992), Old Jakarta (Oxford University Press, 1993), Bengaluru: Story of the City (EastWest Books, 1997).

The Integral Nature of Things: Critical Reflections on the Present

In this PublicTexts event, Amlanjyoti Goswami was in conversation with Dr. Lata Mani, author, feminist historian and cultural critic, about her new book, The Integral Nature of Things: Critical Reflections on the Present (Routledge, 2013) on 12 December 2013. The book meditates on the interrelations and interconnections between drawing from literary theory, sociocultural analysis and cultural studies.

Because I have A Voice: Queer Politics in India

In the opening PublicTexts event, editors Arvind Narrain and Gautam Bhan of the book Because I have a voice: Queer Politics in India (Yoda Press, 2005) were in conversation with Mario D’Penha, historian and activist, on contemporary queer politics as well as writing and activism around sexuality on 11 October 2013.

Rohan Chakravarty’s new book, Bird Business, was launched at IIHS by wildlife photographer Amoghavarsha J S. At the event, Nandita Jayaraj from The Life of Science sat down for a conversation with the author where they discussed, among other things, the usefulness of pigeons! 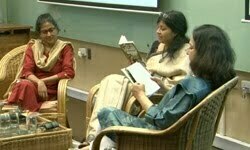 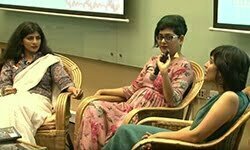 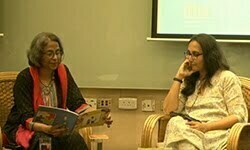 Where Do Stories Come From? Writing for children through the years
Asha Nehemiah